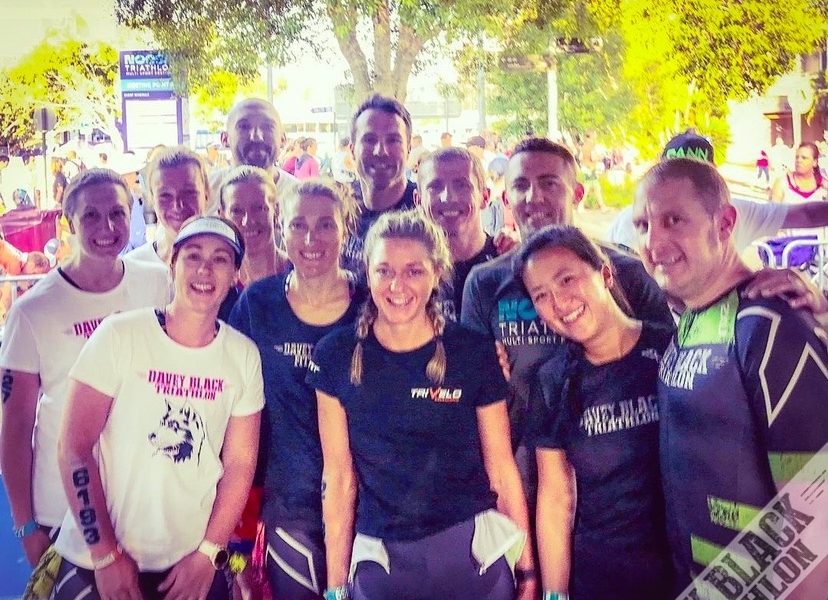 Noosa Triathlon and Multi-sport Festival is now the biggest Standard Distance triathlon in the world. Not only that, but over the course of the 5 day festival, there are also Fun Runs, Run/Swim/Run, Tour De Noosa Ride, the Titan Noosa 1000m Ocean Swim, a Kids Triathlon, the Legends Triathlon, the 5km Asics Bolt Run and the Men’s and Women’s Criterium. There really is something for everyone!

The Davey Black Tri Squad love this race, and there is always a big crew who pack up and head off for the sun and sand over the Melbourne Cup weekend. After a long winter on the track and inside the Yoga and Fitness Studio Melbourne, we look forward to stepping off the plane at Mooloolaba Airport and being hit by the warmth and humidity of the Sunshine Coast weather!

The following is a summary of the course and tips from Performance Triathlon Coach Steve Davis on how best to tackle each leg.

This year sees the introduction of a rolling start. Athletes seed themselves in a category based on their own projected swim times.
Within each Age Group Category there will be 4 Start Zones:
Zone 1 – Under 28 minutes
Zone 2 – Between 28 – 31 minutes
Zone 3 – Between 31 – 35 minutes
Zone 4 – Over 35 minutes
The Rolling starts will continue from the first Age Group Zone 1 to Zone 4 until all athletes in that Age Group have crossed the timing mat and started swimming. The next Age Group will then self-seed into the 4 Start Zones and this process will be repeated until all Age Groups have commenced the swim. *Athletes must start in the correct category group or they will be disqualified.

The swim can be quite choppy. If there are a few waves around, then heading out you will need to have practiced duck diving so you can dive under the bigger waves to avoid being pushed backwards.

The back straight is generally pretty good. You don’t have much else to help your sighting other than the swim bouys with just the woodlands in the background. There are breakwater rocks that will be useful, but as a rule, try and use the bouys as much as possible.

Once you turn for home, it can get tough if there are waves around, but at this point you are swimming parallel to shore, so you can use the shoreline to sight and just pop up for a double check with the finish chute occasionally.

Once out of the water, you then have some deep sand to negotiate before a few hundred meters of running through car parks and across roads to get up to transition.

T1 (green into red lines on the map below)

Remembering that the Noosa Triathlon is now the biggest Standard Distance Triathlon in the world, it is very important that you know exactly where your bike is. Know your row number and when you rack your bike, make sure that you take some time to step back and find some external landmarks such as big trees or bright signage to help you out when you are running in from the swim. I would also recommend that you walk down to the swim entry point and do a dry run of coming in and finding your bike. There is nothing worse than losing time because you can’t find your bike!

40km BIKE (blue lines on the map below)

The bike course at Noosa is beautiful. It is an out and back course that is undulating with one major climb and decent along the way.

You will exit transition and head out of town towards Tewantin along the smooth and fast Noosa Pde and Gympie Tce. There are some roundabouts and several left and right hand turns you have to negotiate through the first 8km, but then is it smooth sailing as you move into the countryside. At the 10km mark is when you hit the 3.5km climb up Garmin Hill. It is a fantastic winding climb of about 3% gradient so soak it up and enjoy it.

After Garmin Hill you then have a rolling 7km to the turnaround point through tranquil farming region. Be aware here not to switch off. Stay focussed on your Power/Speed/HR/RPE and make sure to fuel and hydrate well.

After the turnaround, at the 27km mark, you will hit the back of Garmin Hill for a 1km very steep, straight and fast descent. BE VERY CAREFUL. Without even trying here you will hit 50kph, and there will be stronger athletes who will be coming past at 70-80kph, so make sure you keep left and use a loud voice to let people know you are passing. If you feel unsafe, make sure to pump your brakes to wash off speed rather than grabbing them and holding them on. If you find yourself going too fast and you start getting speed wobbles, just remember to remain relaxed, take a deep breath, pump your brakes and keep your hands, elbows and shoulders loose and try not to grip tight and fight the bike. It’s a straight descent without any turns, so focus on the finish point and it will soon be over.

The road will be closed so you can use the full lane, but anyone who crosses the double white lines will be disqualified.

DRAFTING IS NOT ALLOWED AT THE NOOSA TRIATHLON. Noosa Triathlon due to the number of competitors will operate under a special ruling. When passing a forward competitor or motorcycle, you have a maximum of 15 seconds to pass through the 7m x 3m wide draft zone. Failure to do so may result in a blue card penalty for drafting. If you are issued with a blue card you have to serve a three-minute penalty in the next penalty box on the bike course

T2 (red into blue lines on the map below)

Remembering to use your sighting markers and row number to get through transition quickly, you’ll rack your bike from the Western entrance. You’ll then keep running through the row and loop around along the back of the transition area out onto the run course.

10km RUN (red lines on the map below)

Once out on the run course, you can almost guarantee that it is going to be hot, especially if you had a later wave start.

Running out following the same course as the bike route you’ll have the huge crowds on your side for the first kilometre before you cross over the bridge and run the next 6 or so km’s along the wetlands where it is shady in places, but also very humid. There are 5 aid stations out on the run course, so you are never far away from some hydration if you need it. You really need to keep on top of staying both hydrated and cool out on the run course, so taking small sips of water or sports drink at each station is a good strategy, as well as tipping water on your head to cool you down.

At around the 8km mark you take a detour into some residential back streets. The folk who live there are lovey and have sprinklers, hoses and music out for the athletes, so remember your manners as you run past them and thank them for the support!

From the small back yard support, you’ll then head back onto Noosa Drive for the trip back over the bridge and the adrenaline rush of running past the hundreds of people lining the streets all the way down to the finish line. Lap it up, keep an eye out for your team mates, smile for the cameras and enjoy the Noosa finish line experience.

So that’s it, you have now completed the Noosa Triathlon and you will undoubtedly have your finger on the trigger waiting for the following years entries to open.

Enjoy the atmosphere, have a great race and stay safe on the bike course hill and in the heat of the whole day. Happy racing!